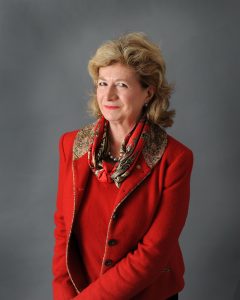 Dr Sarah Furness has been named as the next Lord Lieutenant of Rutland. Sarah says ‘I never dreamt that I would be appointed to such a role. It is an enormous honour to serve Her Majesty The Queen as her representative in Rutland – a county I love. I am delighted and will serve Her Majesty and Rutland diligently.’

Sarah will be known to many people in Rutland as she was High Sheriff of Rutland from 2016 -17. Her year saw the introduction of the Hue and Cry, races for charity down Oakham High Street, Cardio Pulmonary Resuscitation training for all Rutland 15 year olds, mock trials run by magistrates in schools and events in Uppingham and across the county. She says that whilst she had always loved Rutland her year as a High Sheriff meeting so many people doing good for others in the county was transformative. There are over 300 voluntary organisations working for the good of all in Rutland. It is a very special place for which she has great affection and which she looks forward to serving.

Sarah is currently a trustee of the Sustainable Land Trust, an organisation looking after the environment and turning around the lives of troubled teenagers.

She is a governor of Uppingham Community College.

Sarah is also a trustee of Rutland Grants which provides help to those in Rutland who are ill or poor and in need.

Rutland has one of the biggest alms house charities in England. There are 102 residences for the elderly run by the St John and St Anne’s charity in central Oakham and Uppingham. They have recently asked Sarah to join their board.

Sarah is on the Steering Committee for Women in Philanthropy a group of women from Leicestershire and Rutland who collectively give to three small carefully chosen local charities each year.

Children’s mental health was something which Sarah realised was of great concern during her year as High Sheriff. Sarah has been asked to chair a project ensuring that Rutland’s youngsters have the best help available. She also hopes to chair a project on End of Life Care – something of great importance in the county which is due to have an enormous increase in the proportion of elderly people in the next twenty years.

Sarah has been pleased to join the board for the Rutland Cinema project Kino.

Sarah attends beautiful St Andrew’s church in Whissendine where she lives and is a member of the Parochial Church Council.

Sarah is a passionate gardener. Her garden has been opened in the National Garden Scheme (Yellow book) for the last sixteen years. In spite of her appointment it will be open on May 27th this year. Sarah keeps bees, hens, white doves and Koi carp and has a golden retriever, Molly. Happily married to Professor Peter Furness for nearly 39 years he looks forward to supporting her in the role of Lord Lieutenant. Her daughter, Felicity who grew up in Rutland and went to school here is also delighted that her mother has been given such an honour.