I had a fascinating visit  to Leicester Fire and Rescue. They do so much work on PREVENTION – which is vital but hard to quantify. And paradoxically,  the more successful they are at prevention, the less it looks as though they are needed!  But the cost of prevention PLUS putting out fires, rescuing us from accidents, flood, storms & more = £64.71p per annum for a Band D council tax payer.  That sounds like good value to me.

They are now using virtual reality films to demonstrate real dangers.  They have  devised riveting 90 second scenarios to alert us to the dangers of house fires, increase awareness of motorcyclists amongst car drivers and dangers of the use of mobiles while driving etc.   They have also developed virtual reality scenes to train fire officers. 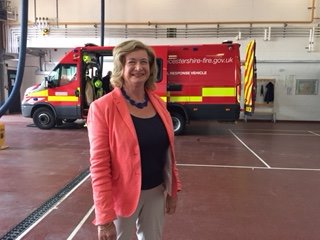